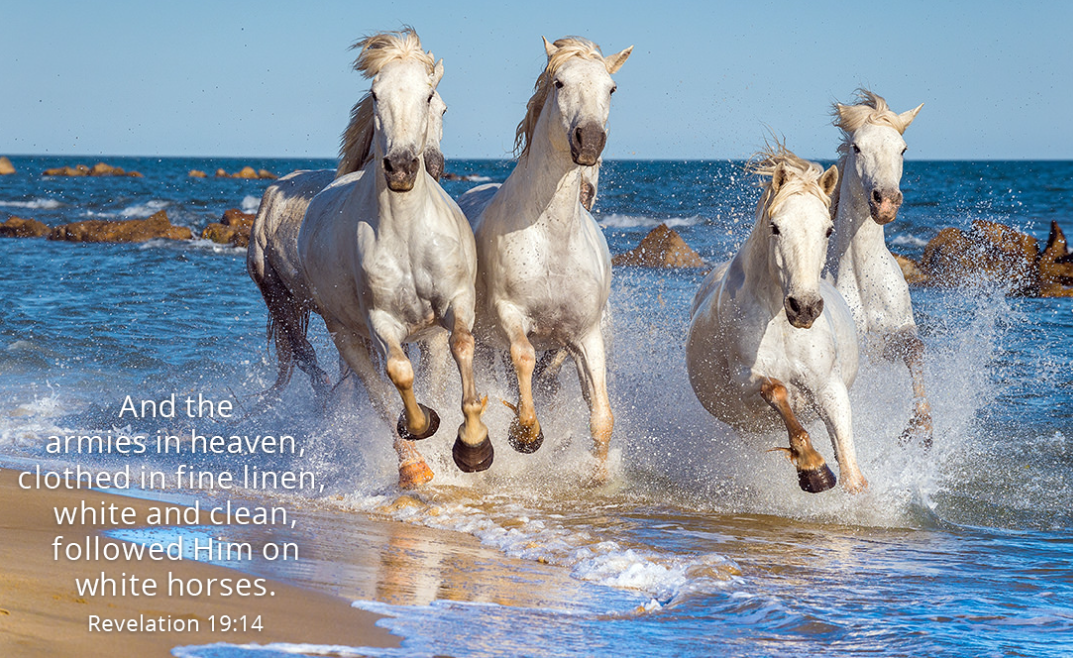 Revelation 19:11-16 (NKJV) 11 Now I saw heaven opened, and behold, a white horse. And He who sat on him was called Faithful and True, and in righteousness He judges and makes war. 12 His eyes were like a flame of fire, and on His head were many crowns. He had a name written that no one knew except Himself. 13 He was clothed with a robe dipped in blood, and His name is called The Word of God. 14 And the armies in heaven, clothed in fine linen, white and clean, followed Him on white horses. 15 Now out of His mouth goes a sharp sword, that with it He should strike the nations. And He Himself will rule them with a rod of iron. He Himself treads the winepress of the fierceness and wrath of Almighty God. 16 And He has on His robe and on His thigh a name written: KING OF KINGS AND LORD OF LORDS.

Here in these verses, we see Christ coming in His great glory. Christ’s second coming will be His final execution of the wrath of God upon a sinful world. The rebellion of Satan, demons and men is going to be completely wiped out, and every last one of them will be judged. Christ will put down all unrighteousness before He establishes His Kingdom here on earth. The furry of Christ’s wraith in His second coming is in sharp contrast to His first coming. In His second coming, Christ comes down out of heaven riding on a white horse to go to war against all the wicked ones on earth. And the armies in heaven follows Him. The Lord Jesus Christ is called “Faithful” because He is going to execute God’s plan to rid the earth of evil. Christ is also called “True” because He is the Truth. The Lord Jesus Christ is coming again as a King to judge the wicked and make war against them. And He will rule over the entire earth with a rod of iron. Christ is the KING OF KINGS AND LORD OF LORDS. And “He had a name written that no one knew except Himself.” What is this name? We are given four names here: first, Jesus is called the King of kings, which corresponds to the Gospel of Matthew because Matthew presents Christ as a King; second, Jesus is called Faithful and True, which corresponds to the Gospel of Mark because Mark presents Christ as the Servant of God; third, Jesus is called the Word of God which corresponds to the Gospel of John because John presents Christ as the Word; and fourth, Jesus is said to have a name that no one knew except Himself, which could correspond to the Gospel of Luke because Luke presents Christ as the Son of Man. The “Son of Man” could be the name that no one knows except the Lord Jesus Christ, if you think in terms of how well we know Jesus. We are told that “no one knows the Son except the Father” (see Matthew 11:27). How well do you know Jesus? My friends, we will have all eternity to learn more about Jesus. And this is why heaven is going to be so glorious. Because as we know more about Jesus, the more we are going to love Him.