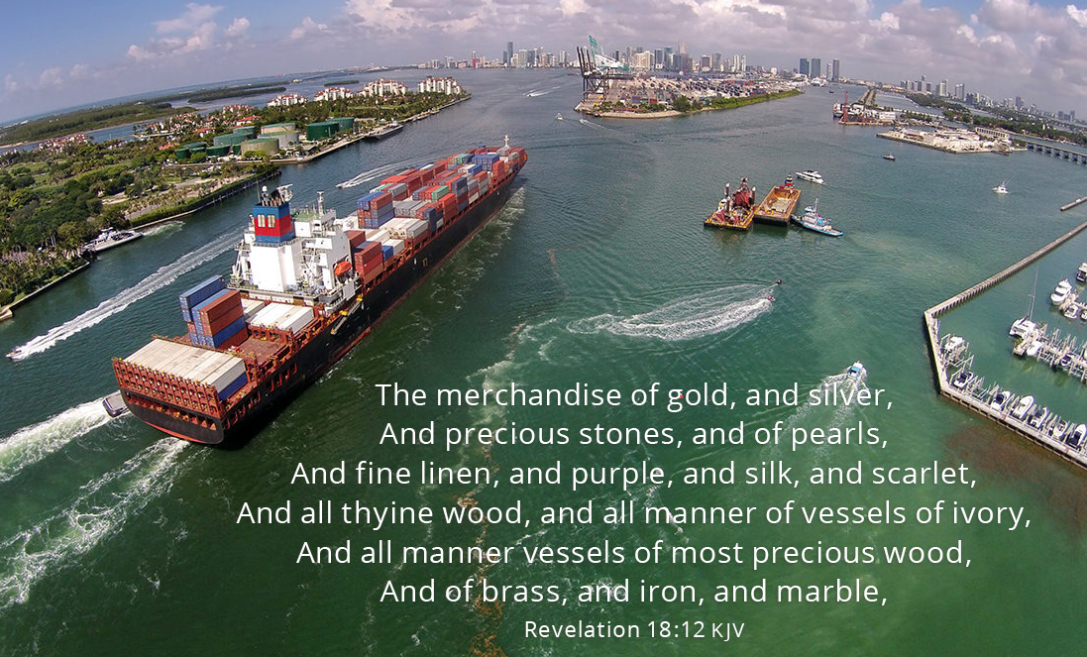 Revelation 18:9-19 (NKJV) 9 “The kings of the earth who committed fornication and lived luxuriously with her will weep and lament for her, when they see the smoke of her burning, 10 standing at a distance for fear of her torment, saying, ‘Alas, alas, that great city Babylon, that mighty city! For in one hour your judgment has come.’ 11 “And the merchants of the earth will weep and mourn over her, for no one buys their merchandise anymore: 12 merchandise of gold and silver, precious stones and pearls, fine linen and purple, silk and scarlet, every kind of citron wood, every kind of object of ivory, every kind of object of most precious wood, bronze, iron, and marble; 13 and cinnamon and incense, fragrant oil and frankincense, wine and oil, fine flour and wheat, cattle and sheep, horses and chariots, and bodies and souls of men. 14 The fruit that your soul longed for has gone from you, and all the things which are rich and splendid have gone from you, and you shall find them no more at all. 15 The merchants of these things, who became rich by her, will stand at a distance for fear of her torment, weeping and wailing, 16 and saying, ‘Alas, alas, that great city that was clothed in fine linen, purple, and scarlet, and adorned with gold and precious stones and pearls! 17 For in one hour such great riches came to nothing.’ Every shipmaster, all who travel by ship, sailors, and as many as trade on the sea, stood at a distance 18 and cried out when they saw the smoke of her burning, saying, ‘What is like this great city?’ 19 “They threw dust on their heads and cried out, weeping and wailing, and saying, ‘Alas, alas, that great city, in which all who had ships on the sea became rich by her wealth! For in one hour she is made desolate.’

Babylon becomes the dominate center for trade. It will be the economic powerhouse of the world. The Antichrist will take over the city by force and make Babylon his capital. From there he will have total dictatorship of the world. The Antichrist will make sure that everything coming out of that city will be in rebellion against almighty God. However, there will be anguish in the world because of God’s judgment of Babylon. The wicked thought it will never happen. Yet in an hour, Babylon is nothing but smoldering ashes. Today, we know that a large enough nuclear and atomic bomb can level a city in a catastrophic explosion. When the world hears the news of the destruction of Babylon, they will begin to wail in hopelessness anguish. They will cry out, “Ouai, ouai!” for in one hour the city of riches and luxury, the economic power of the world, is laid desolate. All who became rich because of Babylon’s economic success will morn because of the depression that is brought on the world because of the sudden destruction of Babylon. This is the final judgment that will bring Christ to earth again to set up His Kingdom. My friends, this has an application for us today. How do you see luxury items today? Has it become a necessity? Could you live without it, if it suddenly went up in smoke? Will it break your heart if all of the luxuries in your life goes up in smoke? My friends the things of this world is passing away. God is going to judge the world and the things of this world will go up in smoke. Is your heart in heaven? Is your heart fixed on the Lord Jesus Christ?