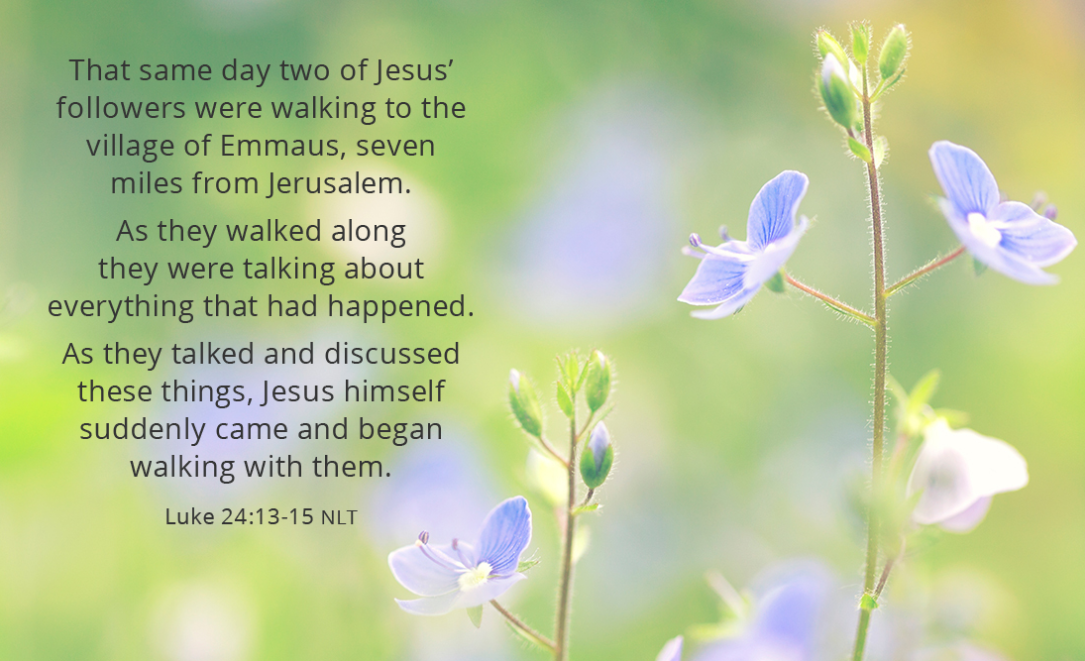 Luke 24:13-18 (NKJV) 13 Now behold, two of them were traveling that same day to a village called Emmaus, which was seven miles from Jerusalem. 14 And they talked together of all these things which had happened. 15 So it was, while they conversed and reasoned, that Jesus Himself drew near and went with them. 16 But their eyes were restrained, so that they did not know Him. 17 And He said to them, “What kind of conversation is this that you have with one another as you walk and are sad?” 18 Then the one whose name was Cleopas answered and said to Him, “Are You the only stranger in Jerusalem, and have You not known the things which happened there in these days?”

These two disciples were walking back to Emmaus from Jerusalem. It was about seven miles away. And they were talking about the death and the resurrection of the Lord Jesus Christ. Then Jesus joined them. They had never met Jesus, and they were not too sure about His resurrection. That is probably why they were debating it among themselves. And that is probably why they had no idea that it was Jesus who joined them. They did not believe in the resurrection. So, they were not even looking for Jesus. Then Jesus asked them “What kind of conversation is that you have with one another as you walk and are sad?” These two disciples could not believe their ears. Everyone in Jerusalem were talking about the arrest, crucifixion and resurrection of Jesus. Everyone had their own opinions. Some believed, most did not, and still many more were unsure.  And so, these two disciples could not believe that anyone who had been in Jerusalem, could not know of the events of the past few days. It was public news. It was done openly. And everyone in Jerusalem were talking about it. Much like today, my friends, the life, death and resurrection of the Lord Jesus Christ are known to everyone. The “Good News”, the gospel of Jesus Christ, has been taken to the ends of the earth. “For since the creation of the world His invisible attributes are clearly seen, being understood by the things that are made, even His eternal power and Godhead, so that they are without excuse” (Romans 1:20 NKJV). And everyone has their own opinion about Jesus. Some believe, most do not, and still many more are unsure. My friends, I say to you that it is true. The Word of God tells us this: “For God so loved the world that He gave His only begotten Son, that whoever believes in Him should not perish but have everlasting life. For God did not send His Son into the world to condemn the world, but that the world through Him might be saved” (John 3:16-17 NKJV). All you need to do is believe in the Lord Jesus Christ. Repent of your sins and accept Him as your Lord and Savior. And you shall be saved and have eternal life. My friends, don’t put it off much longer. You do not know when your life will be taken from you. And we do not know when Jesus will return. And when He does, it will be too late. Yes, it has been over 2,000 years since Jesus said that He will return for all who are His. However, “The Lord is not slack concerning His promise, as some count slackness, but is longsuffering toward us, not willing that any should perish but that all should come to repentance” (2 Peter 3:9 NKJV). My friends, that is God’s plan for you.